Notice: We are Erasmus Plus (UE)

The region of the Mountain is unified from the geographical point of view due to its rugged nature, although traditionally communications between the different sectors have not been easy for this reason. The name refers to its belonging to an administrative unit, the province of Palencia, although the great distance to the capital and the difference with the rest of the regions of this province make it a unique unit. 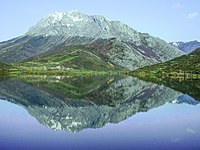 El Espigüete, one of the most characteristic peaks of the Mountain of Palencia, with its 2,450 m..

The landscape and ethnographic characteristics make it very attractive as an example of tourism in rural areas. In recent years, it has provided itself with consolidated tourism resources and infrastructure and is committed to continuing to consider tourism as one of the strategic elements for revitalising this territory, without forgetting its integration into the rest of the economic activities of the region.

On the route through Fuentes Carrionas you will find the highest peaks of the Mountain of Palencia: the Curavacas (with 2,525 m.), the Espigüete (with 2,450 m.) and Las Lomas (with 2,451 m.). This area is named after the Carrión River, which rises in the Fuentes Carrionas Lagoon. To the abundant water of this river is added the water accumulated in the Camporredondo and Compuerto reservoirs. The richness of oak and beech forests, the areas of excellent pastures, the quantity and quality of fishing and hunting are assured in these environments.

At the head of this area is the town of Guardo, crossed by the Carrión River. Taking it as a starting point, we can visit the San Quirce Valley or the Alto de Torales, allowing ourselves to be impressed by the beauty of the landscape. We will visit villages such as Mantinos, Villalba de Guardo or Fresno del Río, and we will be able to extend this visit to towns such as Velilla del Río Carrión or Otero de Guardo, los dos Cardaños, Camporredondo, Alba, La Lastra, Rebanal de las Llantas, Resoba, San Martín de los Herreros, Santibáñez de Resoba, Triollo, Ventanilla,… villas full of legends, popular architecture, fiestas and rich gastronomy, all of them with the incomparable setting of the mountain landscape.

The Picos de Europa National Park is located in the Cantabrian Mountains, forming a mountainous front between the provinces of Asturias, León and Cantabria.

In 1918 the Covadonga Mountain National Park was created, covering only the area defined by the Western or Cornion massif. As an extension, the Picos de Europa National Park Declaration was drawn up in 1995. The Park covers an area of 67,455 hectares, including 11 municipalities and three provinces: Asturias (27,355 hectares), Cantabria (15,381 hectares) and León (24,719 hectares). The degree of protection of the Picos de Europa is elevated to the category of National Park due to its natural and ethnographic values, with the aim of preserving over time the compatibility of traditional uses and the conservation of its natural values with the public use of space.

The landscape of the Park is largely shaped by the basins of the rivers Sella, Cares and Deva and the division into three main mountain ranges: Western, Central and Eastern, with their associated valleys. The Park’s wide altitudinal range gives it a great diversity of landscapes, further increased by the different traditional uses depending on the areas. In this way, the landscape of the Picos de Europa National Park includes, in general terms, large wooded areas, mountain pastures in the most cattle-raising areas, as well as rocky areas typical of the large limestone masses of the three main mountain massifs. This diversity of landscapes also provides a great biodiversity that includes the most characteristic and endangered species of the Cantabrian Mountains.

Apart from enjoying the degree of protection of a National Park, the Picos de Europa have also been proposed as a Place of Community Interest (SCI) (with the Special Areas of Conservation (SACs) of the Asturian and Leonese slopes already having been promoted), and declared a Special Protection Area for Birds (SPA) and a Biosphere Reserve (2003).